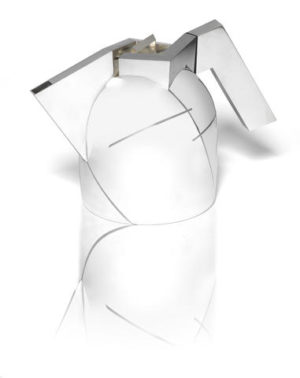 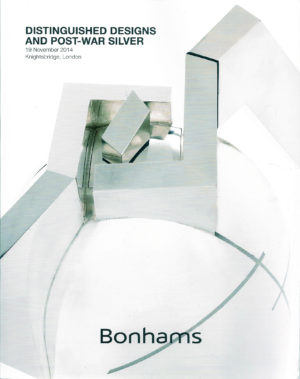 The Front Cover of Bonhams Catalogue

Using the idea of something moving across a surface to develop a design for a Teapot.

I turned a hemisphere in wood to represent the infusion bowl, where the tea brews. Then covered it in a thick layer of plasticine. I manipulated the plasticine until I had something that resembled a handle on one side, a spout on the opposite side with an area in the center that could become a lid.

When the material limit of the plasticine had been reached, I changed materials to card. I continued modeling with the card which tightened form giving it edges and surfaces.

Again I changed materials, this time from card to hardwood. I transferred the pattern from the card to the hardwood and fitted the pieces onto the hemisphere. Using the hardwood I created templates, again in card from which I was able to transfer the pattern on to metal to make a blank.

I marked out the metal with a scribe and I pierced-out the blank. Then I scored 45o grooves required to fold the metal parts to 90o using a scoring tool I made for the job. I folded the edges up and silver soldered along the inside of the fold lines. Then I soldered supports on the inside to make sure they were parallel and stayed in place.

Each side was fabricated in this way. The inside edges of the metal parts were chamfered using needle files to fit exactly the curve of the metal hemisphere ready for silver soldering.

Silver solder will not flow if there’s the slightest gap, the fit had to be neer perfect. All joins to be soldered must be clean and fit together perfectly.

The parts were held in place on the pot by ‘raising stitches’, beads of metal carved out of the pot. Using iron wire to bind and hold the pieces in place. The iron binding wire arranged in such a way as to allow the metal to expand and contract through the high heat and cooling process of soldering without anything moving out of alignment.

Silver soldering on this scale and with this precision was a surgical procedure.

At the hearth, it took two torches to raise the temperature high enough for the solder to touch and flow. When I was satisfied it had gone according to plan I let the piece and the area around it to cool before pickling. Now there was the other side to fit.

The high temperature required for silver soldering moved the metal slightly and adjustments had to be made every step of the way.

The lid opening and the bezel for the lid was next to make. I soldered the bezel into place on to the lid.

From a block of black nylon I cut and carved a piece that fitted between the handle of the lid and the outside surface of the metal lid. I secured it in place with a nylon screw ensuring total insulation from heat.

The lid domed to match the curve of the pot and fit the bezel perfectly.

I made the handle in a similar way as I did the lid,  fitting black nylon insulation ensuring complete insulation from heat.

The foot of the base was spun and was to be joined to the pot by soldering. I had a shoulder cut onto the base during spinning as to locate the pot during the soldering process.

There was still much to be done, cleaning, polishing, plating. And there were details like the holes inside the pot to catch the tea leaves as the tea pores from the pot and of course, a custom, expanded, foam lined box to keep it in.

The Teapot was in several exhibitions in the late 80’s early 90’s. Then it retired to a cupboard at my mums. It was there in its box in the cupboard for 30 years.

I refer you to my Metal Sculpture for details of the Visual Research project that preceded and informed the Teapot design. 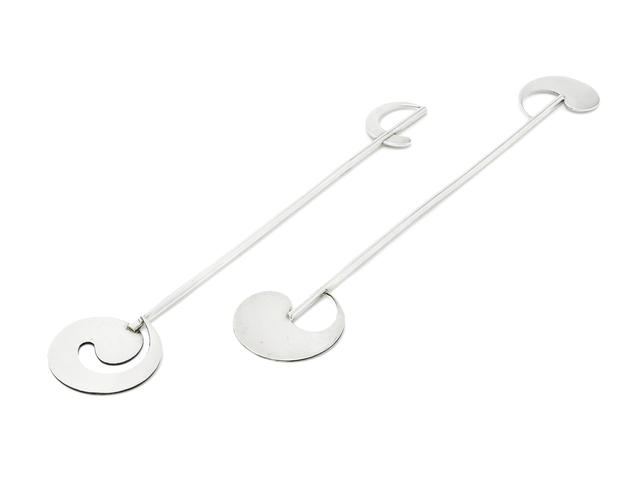