Comment on the involvement literary criticism, structural anthropology and the Bauhaus had on Memphis Milano and on Design.

Memphis Milano undoubtedly drew inspiration from Art Deco, Pop Art and 50’s Kitsch. But there was so much more to the Memphis Group than this. They demonstrated an awareness of the predominance of male-ness that dominates design, film and popular culture and of a femininity that was a fluffy pink sideline. The black box design referred to in Wikipedia was a symptom of this and a sign of how detached we had become form our primal naturalness and of a gender division.

Attention was brought to this through both overt and non-erect symbols of masculinity (Ettore Sottsass, “Treetops” 1981, right) and ‘dangerous’ feminine iconography (Sottsass, “Sol” fruit dish, Memphis 1982, left).

Other aspects of Memphis Milano and fundamental to design is about people, human beings and involves two basics of design. One is concerned with the primal, trans-cultural activity of mark making. The other is how the mark and its message is communicated to those people who are the intended recipients of the marks.

Sottsass’s concern for our essential human essence in design and his recognition of our detachment from it is evident in the article, ‘When I Was a Very Small Boy’, here.

Developments in literary criticism brought about by Ferdinand de Saussure’s Course in General Linguistics and published posthumously in 1916 by his former students. His theories had a monumental impact on the social sciences of the 20th-century. Saussure is widely credited as being the father of modern linguistics, semiotics and more pointedly Structuralism.

During this epoch ground breaking work by the structural anthropologist Claude Lévi-Strauss was published throughout the late 1940s and early 1950s and whose master project extended in to the second half of the 1960s was also well known. It is not too presumptuous to assume that as a writer and intellectual Barbara Radice would know of these developments in literary criticism, her field of professionalism.

Another presumption of small magnitude I suggest is that as an artist and designer concerned with mark-making Ettore Sottsass would be knowledgeable of the teachings at the Bauhaus 1919-1933. In particular the publications by prominent teachers there who sought to codify colour, line and form.

The influence of the Bauhaus on 20th century art, design and architecture can not be underestimated.

From art and design a lexicon of marks . . .

From structural linguistics a methodology with which to encode the marks and from structural anthropology a theory of our common human and primal essence. It was a synthesis of these great 20th century advances in thought that enabled the precipitation of a new visual language. 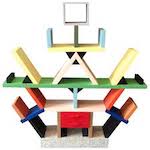 As with all languages, to articulate meaning structure and context is all important, syntagmatic solidarities. To pluck a unit of meaning from its context and to locate it elsewhere out of context and without meaning may have a sensational originality but was often used by the masses with meaningless ignorance.

Without history or depth it can only bask in the shallows of consciousness where its evaporation is assured. This was the sufferance that was to follow Memphis. 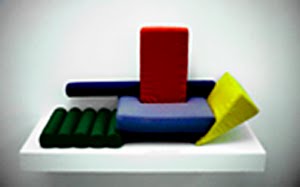 Structural Linguistics in design was cutting edge thinking in the 80’s and 90’s. It required some study. It can produce linguistically literate and culturally significant articles, the sofa above was designed by a student, that are very easy to confuse with ‘Postmodernism in design’.

However, they are fundamentally different. A few early Memphis pieces hinted towards this though were more embracing of a zeitgeist. Ettore Sottsass understood that design is cultural. He demonstrated this by his use of materials, forms and  construction for their symbolic value in his designs.

In essence the projects I ran at the colleges and universities in the UK were postmodern design workshops. Projects were in two parts. 1/ Students researched the symbolic significance of colour, line and form. 2/ The second part saw the realisation of a design for a serviceable object.

Above is a seat that was the result at the end of one such workshop. The students name I not recall to give him credit. His solution is a stunning example of postmodern design – there were many.